A definition of Expressionism/German Expressionism says, that is the aesthetic style, subjective formatting of external impressions, with exaggerated intonation of speech. It is an expression of the mental status caused by objects and not shows through object. Opposes from Impressionists, that attaches importance to the external object. It is mental tendencies, emotional moments for the inner man, following the tradition romanticism, after a century. 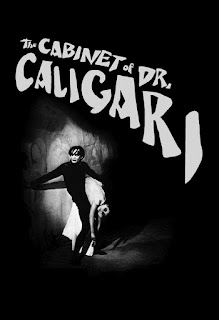 Expressionism occurs mainly in painting as a reaction to the impressionists and naturalism, around 1910 and crosses and other arts (literature, theater and music) will pass to the cinema in 1919 with the film of Robert Vine “The Cabinet of Dr. Caligari” . Its heyday was between 1919 – 1924. The expressionism was the result of the outbreak that followed the defeat of Germany in World War I, on the collapse as empire and the dissolution of traditional values, reflecting the instability of the interwar period, the decline of values, the terrible inflation, poverty, unemployment, the concern of the bourgeoisie; situations that give rise to a escapism from reality and introversion, which require expression – expansion of humans troubled souls.

Death reigned in battlefields and so the “mysticism” and “magic” powers where the Germans surrendered willingly and flourished. Visions fed by strong introspective souls, could not find better means of this expression from the movie, vampires dragging armies of mice (“Nosferatu”), ghosts and dummies driven to crime led impetuous tyrant; (“The man who shows the shadows”, “The Cabinet of Dr. Caligari”), troubled souls who install on earth the reign of brutality and torture described by the Marquis de Sade (“Ivan the Terrible”, ” Jack the ripper “etc.) and many others even more gloomy, macabre and fantastic compose, are the themes of expressionism.

The cinematic expressionism, quite different from the literary or theatrical expressionism, has much in common with surrealism: passionate desire to reject the manifest to deal with the latent content to places and events, charm strange, omnipotence of dream, magnetism of most common objects, search the unknown powers of man, automation of thought that in cases of tension, reveals the true face of life

In an effort to find the outer-social and strictly inner-artistic are causes that expressionism was birth. The historian Lotte Eisner drew the close relationship of the expressionist cinema to literature of the German Romanticism, a sight fully accepted by Henri Angel, who writes: “… in the second half of the 18th century (appearance time of romance) we see manifested in German literature a boost to an invisible mysticism, to a kind of magic, to an unbridled cult of emotion and passion”.

German writers of that period (Richter, Novalis Hofmann) make a substantial night time of the existence. It is the time that torn the veil of phenomena and that we can also participate in the universe secret. The night is the draft within a section where the man coming out of the humanity, eliminates the difference between “I” and “non-self” dissolves ecstatically into the universe, thus entering into a kind of hyper reality.

The Night is the mother of the universe, which take it in her arms of the human being immersed until it lost the sense of “I” and become one with the world. Faithful in this romanticism tradition, expressionism will try to beat the Night juice with all its strength, will repel values Day and even the aesthetic will endeavor to dismantle and to break down. It will try to sink in more dark shadows to get the most light sources of existence!

We should emphasize that for the first time in the history of cinema, stage designers, architects and artists define the artistic structure of a film. The expressionism style, purely visual at first, was transferred to the cinema through the visual elements (decor and costumes) thus making of the Production Designer is main author of the film and later passes in more clearly cinematographic expressive elements, such as editing and lighting. The influence of expressionism in cinema was great. Principle paved the way for the birth of two film genres, horror and fantasy and then pass in “film noir” films. Also greatly influenced the French cinema, which served to create “black” police films during the 30s, based on the aesthetic of expressionism.

Expressionism emigrated to US with the German director Josef von Sternberg to support the aesthetic crime and gangster film genres that became fashionable in America.

Finally each film era (and of our day trials of course) that uses strong contrast (extreme light contrasts – shadows in the same image), owes its aesthetic to expressionism, cause it was first treated this extreme kind of lighting, in movie history.