Do not forget – Make it your daily motto: 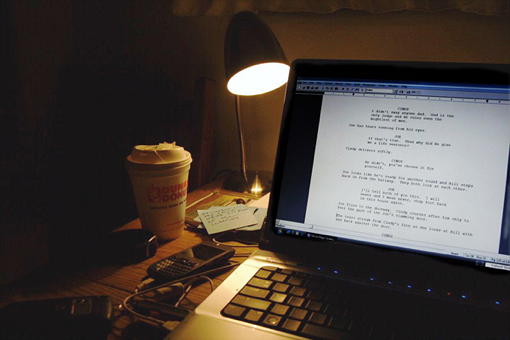 Writing a dramatic screenplay is both a challenging and rewarding experience. Aspiring screenwriters may find the writing process intimidating, but it doesn’t have to be. A screenplay is simply a story written in a unique format. The screenplay is the only element in a movie that must stand on its own. It’s what lures investors to a project during the financing stage and what attracts audiences when the movie is finally released. Star appeal and great cinematography cannot save a poor story. Planning and writing a screenplay is a step-by-step process:

Selecting your story is very personal and depends on the kind of narrative you’re interested in dramatizing. If you’re searching for an idea, there are hundreds of sources: your own personal experiences, anecdotes about friends and acquaintances, historical events, and reports you have read in newspapers and magazines. Sometimes a real-life experience becomes a jumping off point for creating a plot with different twists and outcomes.

Once you have chosen a story idea, you’re ready to begin developing the plot line. The story for your screenplay should be structured into three main stages of action:

The Beginning: Act I
The Middle: Act II
The End: Act III 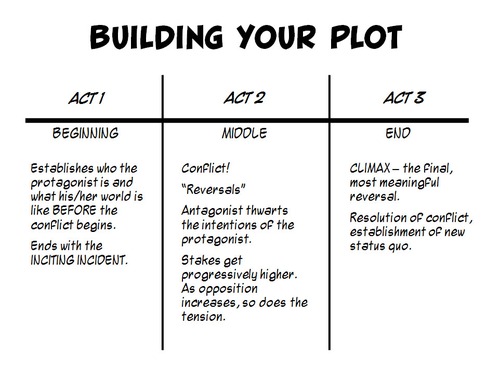 To summarize, the action scenes in a screenplay are structured into three main stages:

Act I: The Conflict
Act II: The Struggle
Act III: The Climax and Resolution

When you note that down that in your paper you’re ready to develop your story and your theme.

Story is how the concept is developed through the use of character and action. The most common pitfall in creating a story is making it one-dimensional. Stories that concentrate too much on action tend to be shallow, while those that concentrate too much on character tends to be dull. The best stories avoid this by developing clearly defined action and realistic, complex characters. Both of these ingredients are essential to a screenplay’s entertainment and thematic value. To achieve this balance, the main character, or protagonist, must be involved in two story lines. One story deals with his/her outer motivation and the other deals with his/her inner motivation. The inner and outer stories are fleshed out through conflict and theme. Let’s take a closer look at these elements:

The outer story is about:

The inner story is about:

Conflict can be in the form of a dispute, challenge, deficiency, decision, threat or an obstacle. It creates tension in the audience and curiosity about the outcome. This makes for a quick moving, interesting story. Conflict, therefore, is the single most effective story element for keeping the audience involved. It is the essence of drama!

Theme is an idea presented in a story, usually about the meaning of life or the human condition. By its nature, theme embodies your opinion about issues dealt with in the screenplay. All great movies explore one or more themes. Theme is developed through the inner story line, which deals with character growth and interpersonal relationships. In a properly structured story, action converges as the protagonist encounters increasing conflict. At the same time, theme expands as the protagonist’s values are revealed and tested. If theme is too obvious it will dominate the story and seem pretentious. It must, therefore, be implicit in the action. Any use of symbols, metaphors and motifs must be woven subtly into the fabric of the story. The least effective way to convey theme is through direct dialogue.

If you got that you’re ready to develop the Characters. Characters are the heart of your story. Their actions will dramatize the events and breathe life into your story. Before you begin writing the individual scenes in your screenplay, you must understand everything about each character you create:

The Protagonist (Hero)
The Antagonist (Villain)
The Supporting Characters

It’s essential to write a detailed biography of each character in your script. A biography should include the main characteristics that define each character: physical appearance, personal experiences, habits, and relationships. Writing detailed biographies is essential for understanding the physical and psychological motivational forces that define your characters. When you understand your characters, you can create believable dialogue for them.

Growth is the process by which the protagonist realizes and overcomes his character flaw. When a character grows, he changes his point of view about life or himself. This change is commonly referred as the character arc. Growth can be conveyed to the audience by a heroic act, a few simple words or even a subtle gesture. For example, in Ghost, Sam was finally able to say “I love you” rather than “ditto.” Sometimes the character can verbally express his growth, as in It’s a Wonderful Life, but this can seem preachy if not handled properly. An effective way for a protagonist to demonstrate growth is by choosing to overcome his flaw rather than achieve his desire.

The antagonist provides the conflict in the outer story by blocking the protagonist from achieving his/her goal. The character must be an active figure in the story. A common mistake is to introduce the opponent and then forget about him for large blocks of the time. For instance in detective stories, where the opponent is revealed later, a mystery must take the place of the opponent until he is revealed. A classic example is Chinatown.

There should be only one opponent. Having more than one will fragment the opposition and, thereby, weaken it. If the opposition must be a group, there should be a clearly defined leader. Classical drama identifies three basic conflicts: man against man, man against nature, and man against himself. The opponent, therefore, can take many forms. The most common opponent is another person. This must be a realistic, three-dimensional character. He/she must be powerful and worthy of the challenge. If the opponent is based on a cliché, it will reduce the protagonist’s credibility. The protagonist, therefore, is only as good as the opponent.

Your next step is writing your script. The trip is long. You can start exercise yourself from start writing today. Don’t put it off. If you have reservations about the quality of your work, it’s normal. The quality will come, but you must practice for it to do so. Make it a point to write every day, even if only for a few minutes. Note that you’re not ready yet to write a full screenplay but you take the bases to start!